There were more close games and surprises on the last day of Second Round action at the EuroBasket 2013 with Croatia needing two overtimes to beat Greece and Italy clawing their way back from 15 points down to stun Spain.

Slovenia also squared off against Finland and suffered a 92-76 defeat, with Henrik Dettmann’s team burying the tournament hosts with an avalanche of three-pointers.

Seven of the eight quarter-finalists were known before Monday’s play with Spain and Greece vying for the last remaining spot.

The Greeks, reeling from a defeat to Slovenia, went into their last Group F contest against Croatia needing to win to maintain hope of advancing.

Even with a victory, Greece knew they would only progress if Italy were to overcome Spain in the following game.

Croatia defeated Greece 92-88 in double overtime to put paid to their chances.

The Quarter-Finals will get underway on Wednesday with Serbia meeting Spain in the opener and Slovenia taking on France in the second game.

On Thursday, Lithuania will go up against Italy, followed by a Croatia clash with Ukraine.

Bojan Bogdanovic had 22 points for Croatia, who sealed first place in Group F with the victory.

Greece fought bravely and knotted the clash at 70-70 at the end of regulation with a three-ball from Nikos Zisis.

Bogdanovic then tied the game at 77-77 with 25 seconds remaining in the first overtime with a three-pointer.

Greece held the ball for one shot, with Zisis darting into the lane to attempt a lay-up but he missed.

Croatia took the lead for good in the second overtime time at 88-86 with just 30 seconds to go after a Dontaye Draper basket.

Zisis had an opportunity to pull Greece level 11 seconds later but again was off target with a lay-up.

By falling short of the Quarter-Finals, Greece have no chance of qualifying for the 2014 FIBA Basketball World Cup.

Six places for next year’s event are up for grabs in Slovenia.

“I believe the key shot was the three-pointer by Bogdanovic.”

By finishing first, Croatia will take on the fourth-place team in Group E, Ukraine.

Italy trailed Spain by 15 points in the second half and went into the fourth quarter behind by 11 but fought back to force overtime and then won, 86-81.

Gigi Datome knotted the game at the end of regulation when he caught an inbounds pass, split a double-team and floated into the paint before banking in a short jumper.

In the overtime, Italy took the lead for good when Alessandro Gentile made two free-throws to make it 74-72 just 3:46 from the end.

After disappointing results against Slovenia and Croatia, the win over Spain has put Italy in a good frame mind for their Quarter-Final against Lithuania.

“We went up against the best team in the European Championship,” Italy’s Pietro Aradori said.

“We already knew how tough this game would be. But we deserved this win. We never gave up.

“We went down by 10 or more points but we came back. We scored the shot at the buzzer to go to overtime. We are happy about this kind of game. Now we are already focused on Lithuania.”

Spain were reminded yet again if they ease up defensively, as appeared to be the case in the fourth quarter, they will be punished.

They will have to take on Serbia, the Group E winners.

“I thought we had the game under control for the first three quarters,” said Marc Gasol, who had 32 points and 10 rebounds for Spain.

“We were playing good defense and we were able to run and get easy shots. But then in the fourth quarter, kind of the same thing happened as against Slovenia and Greece, we stepped down defensively and couldn’t get back into the game.”

Slovenia squared off against Finland in the nightcap and the fans in the sold-out Stozice Arena were treated to a real humdinger.

Roope Ahonen’s three-ball at the half-time buzzer, Finland’s seventh, knotted the contest at 42-42.

Finland didn’t cool off in the third or fourth quarters, either, drilling 10 more three-pointers.

Gerald Lee led the way with 17 points for the Finns, who got 16 apiece from Mikko Koivisto and Sasu Salin and 14 from Petteri Koponen.

Koivisto was four of eight from the arc and Salin four of six while Samuel Haanpaa and Ahonen were both three of five from long range.

The victory was the first in five competitive internationals for Finland against Slovenia.

The win was Finland’s first in Group E, though, so they will exit the competition. 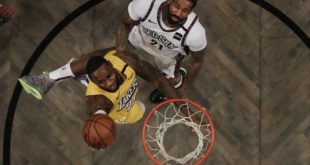 NEW YORK — LeBron James is on his way to Philadelphia, set to pass Kobe Bryant on …