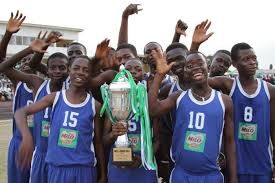 The 2012 edition of the Milo Junior Ball is two months gone but the memories of the tournament continues to linger on our minds.

Young and budding talents were thrown into the hat and most never disappointed as they exhibited enough axiom during the two-month competition.

The level of competition was higher than what was put up by the players in 2011. The young players stood up and led by example, setting the standard in terms of intensity.

Probably the standout at this year’s competition was the fact that there were new and emerging forces. The competition saw irrepressible Kwadwo Attafuah of Akosombo International School , Catholic Jubilee duo Yaw Acheampong and Justice Dotse.

Mfantsipim’s Daniel Owusu brought his ‘A’ plan to the competition by displaying superb basketball during the finals.

With hard-nosed and talented players, a great team ethic, a promising coach and some of the noisiest fans around, it’s no surprise that Base Ordnance Depot made it to the finals.

Unfortunately for the Burma-camp based side, they played against teams with higher aspirations

Justice Ansong led the team in the front court while in Paul Tawiah, they had one of the top performers expected to light the tournament. He offered such a great inside-outside threat and held the key.