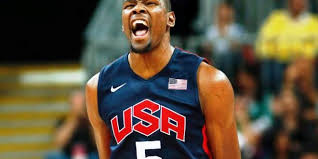 Brooklyn Nets forward Kevin Durant is one of the most decorated American basketball players in Olympic history. He won a gold medal in 2012, and then won another as Team USA’s leading scorer in 2016. In fact, his 19.5 points per game in 2012 are the most any American has ever averaged in the Olympics, and his 19.4 points per game in 2016 come in second on that list.

But as part of an oral history about the legendary 2008 “Redeem Team,” Durant revealed that he is still upset about the gold medal he didn’t get a chance to win. As a 19-year-old, Durant was the final cut from Team USA’s roster in 2008, and he shared his disappointment with ESPN.

“I was disappointed not making the [2008] Olympic team. I felt I played my way onto the team. Nobody really expected me to play that well in the practices, but I was 19 and I felt like I got snubbed. I felt disrespected, and I was like, ‘Nah, this can’t go down like that. It’s not happening again.’ I was just so upset that I wasn’t part of the Redeem Team. You could tell those guys had so much fun playing with each other and I wanted that even if I was on the bench. I just wanted to learn, soak that energy up from those guys.”

At the time, Durant was coming off of a season in which he had won NBA Rookie of the Year by averaging over 20 points per game for the Seattle Supersonics, but Team USA already had LeBron James, Kobe Bryant and Dwyane Wade. They had little need for perimeter scoring, which helps explain how they landed on players like Michael Redd and Tayshaun Prince for roster spots over Durant. While Durant’s youth was certainly a factor, Redd and Prince more easily slotted into specific roles on the roster.

But four years later, Team USA apparently learned from their mistake in snubbing Durant. No. 1 overall pick Anthony Davis, who had not yet played an NBA game, earned a roster spot at camp and won gold for the Americans despite his lack of a track record. His age didn’t prevent him from making the squad. While nothing is set in stone for next year’s roster, Zion Williamson will likely have a chance to earn his way onto the American roster as well, despite having only one year of NBA experience.

Team USA is realistically going to be favored in the Olympics no matter who plays for them, but in 2008 they chose not to take any chances. They now seem more willing to do so, thanks in large part to Durant.

It is somewhat ironic to hear any player of Durant’s caliber discuss being snubbed for an Olympic spot this summer given Team USA’s struggles to fill out its roster. Gregg Popovich would have welcomed a player as decorated as Durant was in 2008 into this lineup given the relative lack of talent on his current team.

But after losing in 2004, American players were determined to reclaim the gold in 2008. Playing for Team USA meant more then. Durant’s dominance is likely part of what steered superstars away this summer. He made it look easy when wore red, white and blue. It certainly won’t be for this year’s group at the FIBA World Cup in China, starting this weekend.