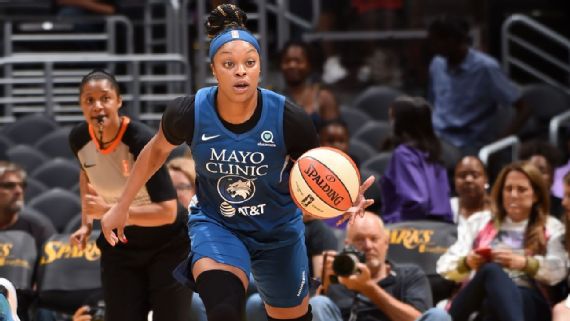 When Minnesota’s season concluded last year, it felt poignant: the end of a spectacular phase of a WNBA franchise being led by a home-state hero. But it wasn’t the end of the Lynx as high-quality competitors.

It has been a different but fulfilling season this year. Yes, Minnesota’s own much-beloved Lindsay Whalen retired. Superstar and former MVP Maya Moore is taking a sabbatical from basketball. Rebounding wizard Rebekkah Brunson was dealing with concussion issues earlier in the year and isn’t on the roster. And the Lynx’s building block player, 2006 No. 1 draft pick Seimone Augustus, wasn’t able to play until Aug. 6 after knee surgery.

Yet center Sylvia Fowles has stood tall, and the Lynx have qualified for the WNBA playoffs for a ninth consecutive season. They’re 16-15 and finish with Indiana at home on Sunday, at Phoenix on Sept. 6 and at Los Angeles on Sept 8 — and still have a chance for a better record than last year’s 18-16.

“I’m very proud of what we’ve done this season,” said Fowles, the former MVP who’s averaging 13.9 points, 8.9 rebounds and 1.4 blocked shots. “A lot of people counted us out because we didn’t look the same. But I actually never viewed this as a rebuilding season. Everybody’s stepped up to the plate.”

Guard Odyssey Sims, who Minnesota got in a trade with Los Angeles before the season, has proven to be even better than what Lynx coach/general manager Cheryl Reeve was expecting. Sims is averaging team highs of 14.3 points and 5.4 assists, and with her explosiveness, Reeve now jokes she can’t figure out how the Lynx guarded Sims when she was with the Sparks.

Lindsay Whalen ready to instill her own vision for Minnesota Gophers
Napheesa Collier, the No. 6 draft pick who is a rookie of the year candidate, has seen her playing time increase due to the season-ending injury of veteran signee Karima Christmas-Kelly, who was limited to six games. Reeve points out that Collier has successfully made a rare transition in the WNBA, going from playing power forward in college to small forward in the pro game.

MINNEAPOLIS, MN – JULY 13: Lindsay Whalen #13 of the Minnesota Lynx handles the ball against the Las Vegas Aces on July 13, 2018 at Target Center in Minneapolis, Minnesota. NOTE TO USER: User expressly acknowledges and agrees that, by downloading and or using this Photograph, user is consenting to the terms and conditions of the Getty Images License Agreement. Mandatory Copyright Notice: Copyright 2018 NBAE (Photo by David Sherman/NBAE via Getty Images)

Collier is averaging 12.9 points and 6.4 rebounds, and what surprises no one who watched her at UConn is how calm she is about the whole thing. Fowles, Sims and Collier have started every game this season.

Forward Damiris Dantas is in her second stint with Minnesota, where she began her WNBA career before going to Atlanta. A calf injury cost her eight games this season, but she’s averaging 9.1 points and 4.3 rebounds, and Reeve has been glad to have her on the boards, especially after rookie forward Jessica Shepard was lost after six games with an ACL injury.

Veteran guard Danielle Robinson brings experience and her wheels — even if Reeve sometimes has to remind her that speed isn’t as much a weapon if you have too many turnovers. Robinson has worked on that, plus her shot selection, to fill in the point guard role.

The Lynx also have had players come off the bench to give them some quality minutes, like Lexie Brown, Stephanie Talbot and Temi Fagbenle. Augustus hasn’t played a lot in her nine games, but her presence on the bench — even when she wasn’t in uniform — was important.

“We knew how depleted we were going to be of a lot of our veteran presence,” Reeve said of building the Lynx for 2019. “And that was pretty daunting. So the first part was free agency, and then the draft. When we got to the end of that, we had a sense of jubilation about the tall order it was, but how it all came together. We had players who were passionate about the game and wanted to improve.

“We knew people were anxious to see the dynasty, so to speak, end. If you can envision a building starting to fall, but there are some people underneath with their arms up trying to hold it up. And at times, their knees are buckling, but they’re doing it. That’s what it sometimes felt like. Come hell or high water, we wanted to be a team that was in the playoffs.”

Guard Odyssey Sims leads the Lynx with 14.3 points and 5.4 assists per game. Minnesota clinched its playoff berth on Tuesday.

For eight years — a near eternity in professional sports — the playoffs were basically a given as the Lynx’s core stayed steady (the All-Star Fowles joined the team about midway through the 2015 season). The Lynx were the league’s model franchise, winning four WNBA titles and reaching the Finals an additional two times during that stretch.

But last year, the inevitable cracks started to show. The Lynx lost in the first round of the playoffs to Los Angeles and said goodbye to Whalen. News in early 2019 that Moore was sitting out the season, plus uncertainty about Augustus and Brunson, could have sent Fowles into bittersweet nostalgia mode once the season began with none of them on the floor with her.

“I’m just the type of person, you roll with what you have,” Fowles said. “You can’t sit and ponder what you no longer have. It’s like, ‘How can I be the best teammate for these players?’ That was my focus.”

This year, the Lynx have been doing what most successful franchises must do at some point: create a new version of their identity. With the same head coach and two cornerstone players, they aren’t reinventing their culture, but they are updating it, and different people are in leadership roles.

“If you can envision a building starting to fall, but there are some people underneath with their arms up trying to hold it up. And at times, their knees are buckling, but they’re doing it. That’s what it sometimes felt like.”Coach Cheryl Reeve, on how depleted the Lynx roster was before the season
One of them is Fowles, and she and Reeve acknowledge that has been hard. Fowles’ personality is to just put her head down and quietly work her tail off. But having to be more vocal?

“It’s been uncomfortable,” Reeve said. “And we knew this would be one of our bigger challenges. The leadership team we had was such a well-oiled machine, and we could predict each other’s thoughts.”

This season, Reeve explained, is a little more like 2010, when she took over as Lynx coach, Whalen arrived in a trade with Connecticut, and Augustus entered her fifth WNBA season as a standout player ready to take the next step. Whalen and Augustus had to learn to become better leaders.

Reeve takes pride in how the Lynx have responded to things like a four-game losing streak in June, with three of those games at home at Target Center. How they pulled themselves out of the deep disappointment at the losses of injured Christmas-Kelly and Shepard, two players who would have made an impact with their play and hard-working attitudes. How the Lynx have bounced back from three losses in August with three wins in a row going into the regular season’s final week.

“During the wintertime, I knew my role would have to change, and the dynamics would be different here,” Fowles said. “I didn’t know it would be quite as hard as it’s been, in terms of being more vocal. But I was willing to step up to the challenge. And we’ve had a very good group of women who’ve worked hard. I’m happy I’ve had the chance to make a playoff run with them. I’m excited to keep it going.”

Ennis III: ‘We are going to walk to the Finals in...