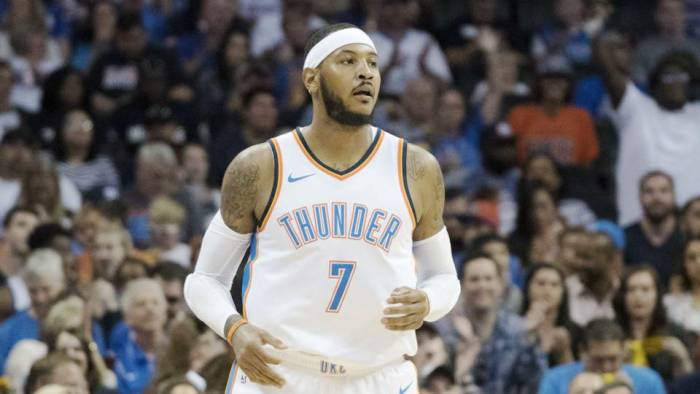 The Portland Trail Blazers are skidding out of the gates to start the season, sitting at 5-9 after a lopsided loss to the Rockets on Monday. They need help in a number of areas, and they’re hoping it’s on the way in the form of Carmelo Anthony, who the team announced on Tuesday has officially signed his Blazers contract.

Anthony — who will wear No. 00 with Portland, rather than the No. 7 he wore during his time with the Knicks, Thunder and Rockets — is on a non-guaranteed contract that will pay him $14,490 every day he’s on the roster until Jan. 7, at which point he will be guaranteed $2.15 million for the season, per Shams Charania of The Athletic.

In other words, if the Blazers want to cut ties with Anthony at any point prior to Jan. 7, they can do so without owing him anything moving forward.

Anthony is expected to make his Portland debut Tuesday night in New Orleans, and the Blazers need him to hit ground the running. It won’t be easy. Anthony hasn’t played in an NBA game since Nov. 8 of last year, and clearly rhythm and conditioning — both of which are among five big things to watch for in Anthony’s debut — will be an issue in the early going.

Scouts who’ve spoken with CBS Sports like the idea of Anthony as a stretch four, where he can serve as a floor spacers with 3-point range and an occasional one-on-one player in Portland’s iso-heavy system. Melo’s defense, however, will be a major issue.

If Terry Stotts can’t devise a system, through both positioning and strategic lineup deployments, to more or less hide Anthony on the defensive end, or at least make him passable when he is spotlighted, it’ll be tough to keep him on the floor unless he’s shooting the lights out.

Bane of the new NBA; load management of star players