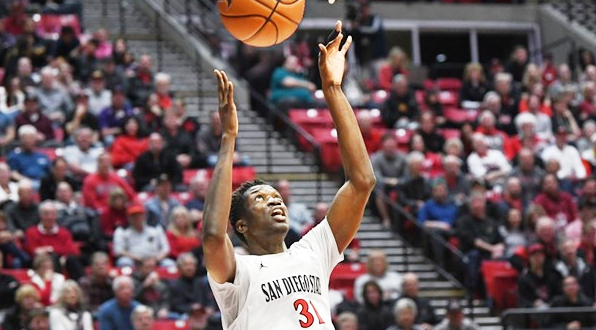 Mensah has “outside chance” to play this season-Reports

Reports gathered by Basketballghana.com indicate Ghana Forward/Center Nathan Mensah has an “outside chance” of playing again this season.

This is due to a complicated respiratory illness that has been diagnosed as pulmonary embolism in his lungs caused by blood clots.

The illness has prevented Mensah from competing in seven straight games for San Diego State University in the Men’s College Basketball 2019-2020 Regular Season in the USA.

Per the San Diego Union-Tribune, Mensah has an “outside chance” of competing this season considering his condition.

The second year player contributed early on to the Aztecs record matching 20 straight wins to open the season; the mark ties that of the 2010-2011 team that was led by Los Angeles Clippers Star Kawhi Leonard.

Prior to sitting out due to the illness, Mensah was averaging 7.2 points and 8.6 rebounds in 20.2 minutes; he averaged 5.6 points and 5.5 rebounds respectively in his first year.

San Diego could extend that run to 21 wins when the team plays University of Las Vegas on Sunday, January 26.