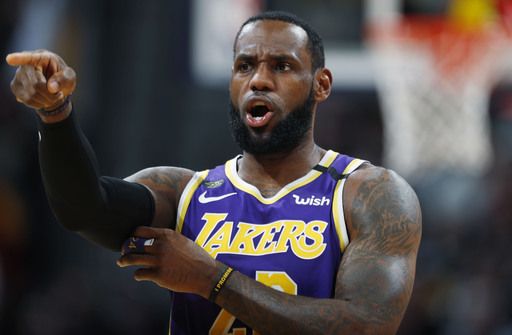 Paul Pierce spent over a decade battling LeBron James. The two met in the postseason four times. Both needed to get through the other in order to win their first championship, but in a historical sense, that hasn’t done much to raise Pierce’s relatively low opinion of James. On Wednesday, he gave his list of the top five players in the NBA. Michael Jordan earned the No. 1 spot, with Kareem Abdul-Jabbar, Bill Russell, Magic Johnson and Kobe Bryant rounding out the five. Conspicuously absent from that list? James.

Pierce explained the decision on NBA Countdown, arguing that James never did anything “to build up any organization from the ground.”

“Bill Russell built up the organization in Boston,” Pierce said. “He should get way more credit than we give him, a lot of times he’s left out of the conversation. So in saying that, Kareem, look at some of the names I said, Kareem, Magic, Jordan, Tim Duncan, Kobe, Bird, these guys are all top-10 players who either helped build up their organization or continued the tradition.”

As for LeBron? Pierce looks down on him for building superteams.

“He went and put together a team in Miami, and in some ways, he came back to Cleveland to put that team together, and then he went to the Lakers, where a tradition is already made, and we don’t know, that’s to be continued.”

There’s a shred of irony in Pierce taking that stance considering his championship didn’t come until his team acquired Kevin Garnett and Ray Allen. Most lists would staunchly disagree with Pierce for leaving LeBron out of the top five. Both ESPN and CBS Sports released rankings this month that had James at No. 2 overall, behind Jordan in both cases. In purely statistical terms, James leads Bryant, whom Pierce ranked ahead of him, in points, assists, rebounds, blocks and steals per game while having higher shooting percentages from both the field and the 3-point line.

No two lists are going to be identical when ranking players in an all-time setting, but Pierce’s stands out as particularly unorthodox.