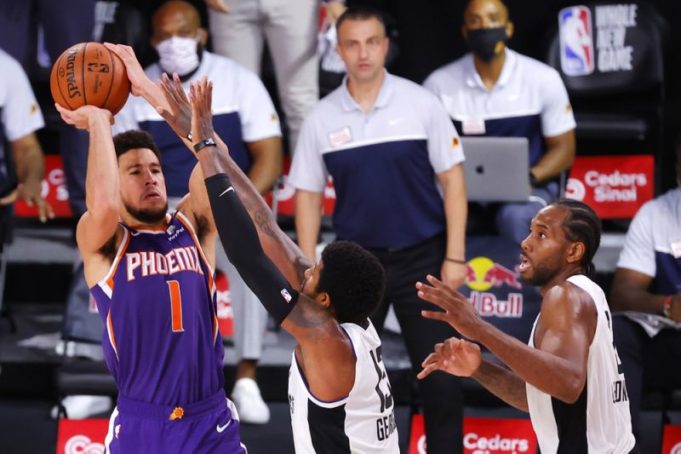 The Phoenix Suns are scorching hot.

They kept up their torrid start to bubble play on Tuesday when Devin Booker stunned the Los Angeles Clippers with a buzzer-beater to secure a 117-115 victory.

With the game tied at 115, the Suns inbounded the ball in the frontcourt with 31.3 seconds remaining. Ricky Rubio missed a floater in traffic with 13 seconds left that Clippers center Ivica Zubac rebounded. But Suns center Deandre Ayton intercepted Zubac’s errant outlet pass out of the post, and the Suns rotated the ball to their All-Star closer.

Booker attacked from the wing, fooled Kawhi Leonard on a pump fake and sunk a fall-back jumper over the outstretched hand of Paul George as time ran out to secure the win.

With the victory, the Suns improved to 3-0 in the bubble and advanced their ever-increasing odds to compete for the final playoff spot in the West. Meanwhile, the loss was the second in three bubble games for the Clippers, whose lead for second place in the West stands at one game over the Denver Nuggets.

The Suns — who arrived at Disney World in 13th place with the worst record among Western Conference teams in the bubble — are now in the thick of the free-for-all for the final playoff spot. Phoenix improves to 29-39, one game back of the Portland Trail Blazers and Sacramento Kings, who are tied for ninth place in the West. If the ninth-place team finishes within four games of the eighth-place team, then those teams will have a play-in series for the conference’s final playoff spot.

A play-in in the West looks inevitable.

All five of the Western Conference teams outside of the playoff picture stand within 3.5 games of the eighth-place Memphis Grizzlies. But none of them are playing better than the Suns, who have also beaten the Dallas Mavericks and Washington Wizards since arriving at Disney World. Booker is the biggest reason why, leading the Suns in scoring in each game while averaging 30.7 points.