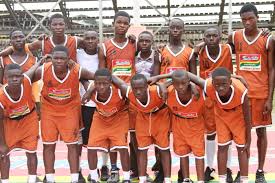 The 2012 edition of the Indomie Community Dunks was launched in Accra on Thursday July 19 to usher in a whole new and exciting package.

Officials of Multi-Pro Private Ghana Limited (distributors of Indomie Instant Noodles) including its Marketing Manager Manish Goyal, Chief Executive Officer of Rite Multimedia, Yaw Sakyi Afari and the Chairman of the Greater Accra Basketball Association, Benjamin Baafi were all present at the short but impressive ceremony.

The Greater Accra basketball chief, who launched the 2012 event, commended the organizers and the sponsors for their continuous support in the development and promotion of the game in Ghana.

He appealed to the government for financial support to help put up at least one ultra-modern basketball court in the country.

On his part, the Marketing Manager of Indomie Noodles, Manish Goyal, praised the organizers, the GBBA and promised his outfit’s commitment in supporting the growth of the game and give hope to mushrooming talents.

“Today we are all living testimonies of how the dwindling fortunes of the sport has been transformed drastically and now basketball is considered as Ghana’s second most preferred sport,” Goyal said

“The visibility for the sport has been enhanced through extensive radio, television, internet and print coverage and our friends in the media should be applauded in that regard for their continuous support,”

“It has also served as the bed rock of unearthing and developing fresh talents in the various communities while providing an avenue for socialization and learning.”

The competition will for the first time be held in three regions with teams in the Ashanti and Central Regions expected to mark their debut.

The age bracket has also been reduced from 18 to 15 to enable the potentials of young and talented players tapped and groomed from the base level.

The 2012 edition will begin in the Ashanti region on Saturday 28th with eight communities expected to fight it out for the right to qualify for the finals.

The event will take place at the Kumasi Anglican Senior High school and will feature communities such as Asokwa, Kwadaso, Buokom, Krofrom, Bantama, Asem, Toase and Dichemso.

The next stop will hit the Greater Accra region where communities such as James Town, Dansoman, Adabraka, Osu-Larbi, Burman Camp, Ridge, Cantonments and Nima-Maamobi in a three-week contest at the Nima court on the 4th, 11th and 18 August 2012 respectively.

The Central Regional competition will take place on 25th August with the finals happening live at the El-Wak stadium on 1st September.

The community basketball competition has contributed significantly to the interest created in basketball in Ghana and has also provided a platform for socialization and learning.

It has also helped to unearth and developed fresh basketball talents in the various communities while serving as an important feature on the calendar.

Community Dunks is powered by Rite Multimedia and sponsored by Indomie Instant Noodles with support from basketballghana.com

We don’t know when the league resumes-GSP League Secretary

2020 Draft could be held in August or September due to...

We don’t know when the league resumes-GSP League Secretary

Antetokounmpo to miss game vs. Wizards with sore quad