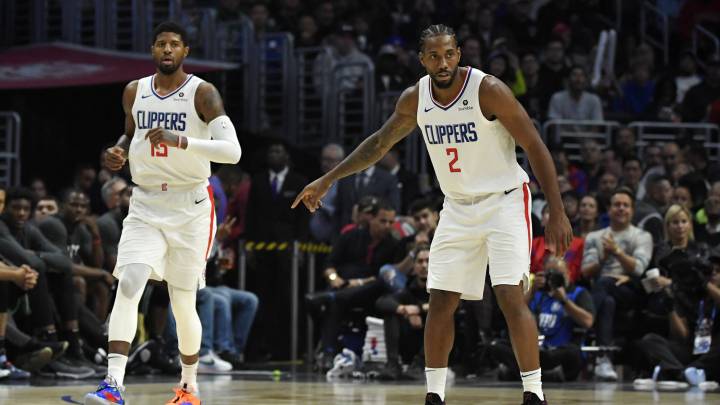 LOS ANGELES — The LA Clippers had to wait 138 days, but they finally got to see what life is like with Kawhi Leonard and Paul George on the court together.

“That s— was fun as hell,” an amped Patrick Beverley said coming off the court.

The Clippers needed to overcome a sloppy game that went to overtime, but they got the first victory with their two prized All-Stars and handed the Boston Celtics only their third loss of the season, 107-104.

George had 25 points, eight assists and five rebounds and hit the go-ahead 3-pointer for the second game in a row. Leonard, playing for the first time following a three-game absence due to a bruised left knee, shot 7-for-20 but provided the game-clinching block on a Kemba Walker 3 at the buzzer. Leonard also registered 17 points, six rebounds and one arena-shaking dunk over Daniel Theis.

“The fact of the matter is we are going to have growing pains, and I think the most positive thing is we understood that. Nobody was pointing fingers or dropping their heads in huddles … at no point was this team ever dysfunctional.”

The Clippers had just one shootaround rehearsal with Leonard and George walking through together in the starting unit, and that came on the morning of Wednesday’s tilt. With George having just returned Nov. 14 following surgeries on both of his shoulders and Leonard sitting the past three games, the Clippers haven’t had any practice time with the two in their starting lineup.

It showed, as the Clippers turned the ball over 23 times, with Leonard and George combining for 10 of them as the Celtics sent traps at the duo.

But what the other Clippers players learned was just how open they would be playing alongside the two stars. Lou Williams scored 27 points, while Beverley was left alone on several shots, drilling four 3-pointers, two of them coming in overtime. Beverley finished with 14 points, 16 rebounds and seven assists.

“I remember I was telling [coach] Doc [Rivers], I came off one pick-and-roll, I was so open, I didn’t know what to do,” Beverley said. “They get so much attention, it’s crazy.”

But Leonard and George showed flashes of why that defensive attention is deserved. With just over three minutes left in regulation, Leonard blew by Marcus Smart before ascending and throwing down a vicious one-handed dunk all over the 6-foot-8 Theis.

The dunk already rivals the one LeBron James had at Staples Center on Nov. 15 when he posterized Sacramento’s Nemanja Bjelica in a Lakers win over the Kings.

“It’s crazy,” Clippers center Ivica Zubac said of the dunk. “… He just jumped over him.”

That dunk and the game-ending block on Walker are reasons why George told ESPN that he has wanted to play alongside Leonard since 2017, when he asked the Indiana Pacers to trade him to San Antonio. The Spurs didn’t have enough assets to strike a deal, according to league sources.

“I mean, that’s the Finals MVP, man,” George said of Leonard. “He knows when it’s time to take over. He’s been there and he’s won championships with multiple ballclubs, so he knows how to stomp and put that foot on opponents’ neck, and that’s what you saw him do tonight.”

It wasn’t pretty for much of the game as the Clippers stumbled over themselves at times. Rivers felt the players were trying too hard to share the ball. Leonard missed 7 of 10 3-point attempts, and he tried to get some shots off before traps came. And George lost his footing and fell when Jayson Tatum (30 points) drilled a step-back 3-pointer to tie the game at 97 and force overtime.

“It’s pretty much just finding each other’s spots and knowing the plays,” Leonard said of what the Clippers have to improve on. “It’s still tough. We are both kind of on a minute restriction; hard to get into a flow. But just knowing plays and each other’s spots and the language on the defensive end [will help]. Repetition is what we need right now.”

Leonard and George each logged 37 minutes, not only earning this win but needing all the help they got from their teammates.

“We need everybody,” he added. “This is not a two-headed monster.”