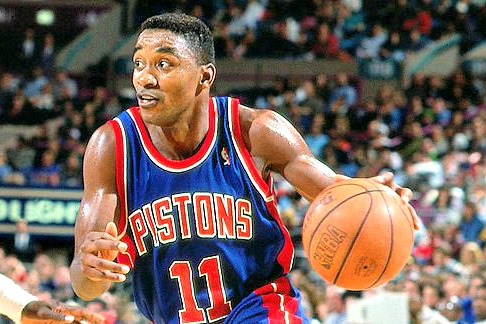 If you’re charting out a list of winners and losers from “The Last Dance” documentary that has captivated sports fans for the past few weeks, former Detroit Pistons great Isiah Thomas would fall squarely in the loser column. At least according to his portrayal. In an on-camera interview, Thomas made no apology for he and his Pistons teammates walking off the court without shaking the hands of Michael Jordan’s Bulls after losing in the 1991 Eastern Conference finals.

The documentary also discussed how Thomas was left off the 1992 Olympic Dream Team, with Jordan relaying a story about how he was assured Thomas wouldn’t be on the team before he agreed to join. Recently, Dream Team member and San Antonio Spurs legend David Robinson said he wasn’t surprised Thomas was left off the team because “chemistry matters.”

With Thomas taking a bit of a beating in the court of public opinion, fellow Chicagoan Doc Rivers has come to his defense. Rivers, the Los Angeles Clippers head coach who had a 13-year NBA career from the mid-80s to the mid-90s, told The Athletic’s David Aldridge and Wos Lambre that he doesn’t appreciate the way Thomas is being portrayed in “The Last Dance.”

“I hate the way that Isiah is being presented,” Rivers said. “Isiah was a ruthless winner … he’s no different from any other winner. Being from Chicago, Isiah’s the best player ever to come out of Chicago, in my opinion. Even my ego has to say that, you know? And then having Michael be the greatest player to play in Chicago … that created a competition on its own right. Like, Isiah wasn’t giving Michael Chicago, and Michael was trying to take Chicago, you know? People don’t even know that part of it. They just see the Detroit part, and the Chicago Bulls part. But the biggest part is that. Isiah still lived in Chicago when he was playing for Detroit. He wanted to come home and be Isiah Thomas; he didn’t want to come home and hear about Michael Jordan. So it had a lot of energy to it.”

Saying that Thomas is “no different from any other winner” sheds light on the fact that Jordan’s relentlessly competitive nature is often viewed as a positive. He regularly criticized teammates, and even punched them occasionally, but it was all fine and dandy because he won six titles. By contrast, Thomas won two titles with a similarly competitive attitude, but walking off the court without shaking the hands of the team that had just beaten him is unforgivable, at least in the eyes of some.

Rivers is also right to point out that the Chicago aspect of the Jordan-Thomas rivalry is often overlooked. Not only were the Pistons and Bulls the two best teams in the East for several years, with Detroit taking an extremely physical defensive approach, but Thomas also had the extra motivation of Jordan potentially taking his throne as Chicago’s basketball icon. He was clearly right to be concerned — when you think of Chicago basketball, Jordan is probably the first name that comes to mind, despite the fact that he’s not from Chicago.

“The Last Dance” has brought up a lot of old wounds and issues that have altered and ruined relationships to this day, with Thomas and Jordan’s chiefly among them. As with nearly every conflict, there is fault on both sides, and Rivers wants to do his part to make sure we get the complete picture.