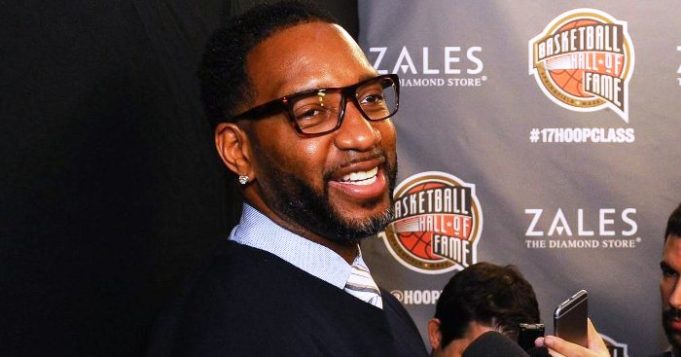 Tracy McGrady and Jermaine O’Neal know what it’s like to enter the NBA out of high school.

They also know what it’s like to be among the best players in the NBA, bounce around to a number of different teams and see their primes fizzle out earlier than expected because of injuries or drop-off in play.

They are ready to share their knowledge with the next generation of professional hoopers.

According to Marc Stein of the New York Times, McGrady and O’Neal plan on starting a player representation agency in the fall and calling it Seven1 Sports Group and Entertainment, which is a mash-up of the jersey numbers they wore during their careers (O’Neal was No. 7 and McGrady was No. 1).

The plan is for McGrady to be the co-owner and an adviser, and he’ll likely leave his broadcasting role with ESPN. As for O’Neal, he plans on being a partner and taking the National Basketball Players Association test in January to become a registered agent.

They also plan on competing against high-profile agencies such as Klutch Sports, Excel Sports and BDA Sports for players eyeing the 2021 NBA draft.

Stein explained the two former players had talked about making such a move in the past but picked up a new level of urgency in their conversations during the COVID-19 pandemic with additional time to remain at home and ponder the future.

“We think it’s needed, and we have a passion for it,” McGrady said. “We’re around kids every single day because we have youth programs. It just makes sense. We see the lack of information that these kids are getting, so we would be doing a disservice to our people if we don’t lend our expertise of what we know and help guide them. This is a calling that we have.”

O’Neal has experience beyond his playing days having worked with young players such as RJ Hampton and Tyrese Maxey at his Drive Nation sports complex in Irving, Texas.

“There’s no magic wand for this,” O’Neal said. “We’re not trying to say we’re the magic wand. But we’re going to be different. You can’t name another pair of people who have had the level of success and the ups and downs that we’ve had in our careers.”

McGrady played from 1997-98 through 2011-12 and experienced the highs of being on the short list of the best players in the league as a two-time scoring champion who was inducted into the Hall of Fame.

He also experienced the lows of dealing with injuries that dramatically cut short his prime. In fact, he didn’t play after the age of 33 and averaged single-digit scoring totals in his final three years in the league.

He was a six-time All-Star and three-time All-NBA selection, although, similar to McGrady, he averaged single-digit scoring numbers in his last four seasons as he struggled to replicate his prime.

Towel used by Kobe in final game sells for over...