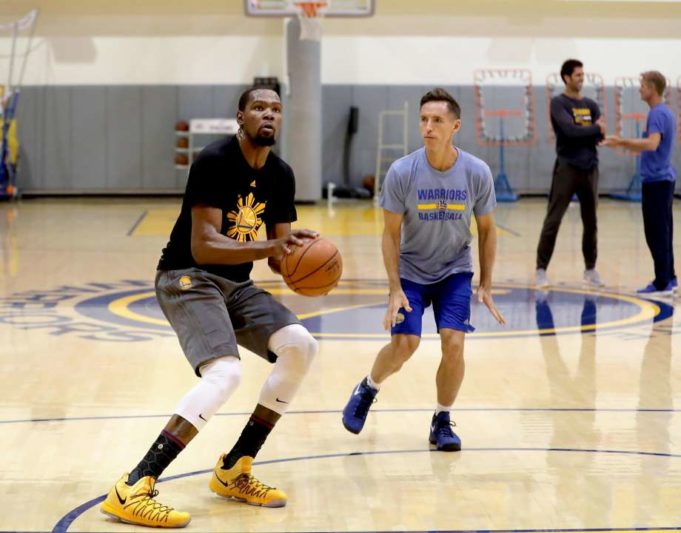 Brooklyn Nets forward Kevin Durant made his first public comments about new coach Steve Nash on Thursday saying he’s “excited” about the opportunity to be coached by the former two-time league MVP.

Durant, speaking on JJ Redick’s “The Old Man and the Three” podcast, said he’s excited about any former player getting a chance to be a head coach in the NBA and says he’s “looking forward” to the chance to learn from Nash.

“His insight for the game, his communication, how he communicates the game of basketball is definitely going to help me as a player develop and it’s going to help the rest of the team,” Durant said.

Durant said that he first had the chance to work out with Nash about seven or eight years ago and that it helped him understand how Nash’s mind works after competing with him early in his career. Nash was coming off the second of his MVP seasons when Durant entered the league as a rookie in 2006-07.

“Every time I’m in the gym with him, I was always like a sponge,” Durant said. “I’m looking forward to this man. I always feel like I’m a student of the game. Somebody who has experienced so much and played in different eras, I’m looking forward to him teaching me some more things about it as well.”

Nash told reporters on Wednesday that his relationship with Durant started when current-Nets assistant coach Adam Harrington introduced the two off the court. Nash said the two developed a friendship from that point moving forward and that he also had the chance to work closely with Durant in his consultant role with Golden State.

“It’s a privilege to work with one of the greatest players to ever play the game,” Nash said. “Someone who is incredibly coachable, inquisitive, and that lends itself to the question of searching. I think what I meant was that Kevin’s always searching, he’s always curious, inquisitive, developing as a human being. So he’s a deep person who has a lot of goals and a lot about him, not just in basketball terms.

“I think my comment is more about Kevin as a human being, the type of person he is, about how he’s always trying to grow, always trying to learn and always asking how he can get better. A big part of that is that Kevin is somebody that is never afraid to say, ‘help me with this’ ‘what do you think about that?’ so that’s the type of confidence and security it takes to be able to ask for help or know what they don’t know. And he has that along with an incredible drive, work ethic, toughness and historic talent.”

Nash’s first foray into coaching will be trying to figure out how best to use Durant and star point guard Kyrie Irving. The talk in NBA circles is whether the Nets will need a third star to go along with their top two guys.

When asked by Redick if he thought he needed a third star on the team or if Caris LeVert could be that guy, Durant said that the best teams in the league now typically have just two stars and that LeVert would be “that perfect guy” for the Nets.

“Any given night, he could lead us in scoring or lead us in assists or he can control the offense or we can go to him in the post in a matchup,” Durant said. “I feel like he has the tools to do everything on the basketball court. On our team, we play unselfishly. We got guys that can play off the basketball. Any given night, anybody can be the star.”

When Durant does take the floor when the 2020-21 NBA season starts, it’ll be his first action since tearing his Achilles in the 2019 NBA Finals with Golden State.

Durant opted not to return to action in the bubble this season and has instead focused on his game and himself.

“I’ve been playing since I was 8, like, really locked in. Every day was centered around the game,” Durant said. “To finally get a year off, it was pretty cool. I started to focus a little bit more, understand what I like to do outside of the game a little bit more, as weird as that sounds at 30 years old. I really enjoyed that time to myself. I learned so much about the game of basketball, the business of basketball. I see it from a different lens. I was watching the game from a coaches’ and a fans’ perspective all at once. I felt a new level of appreciation for what I’m doing for being away from it.

“Going into [the season], I didn’t think I would have that feeling. It definitely helps when the team signs you to a max deal even though you tore your Achilles. That definitely eased my mind a bit. I also just enjoyed having that free time to do my thing. I never got that time. I never got to enjoy that time. But at this point, I’m looking forward to going out there and playing again.”

Gordon Hayward likely to pick up option, per report

Gordon Hayward likely to pick up option, per report