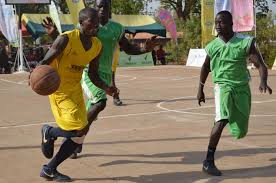 “WE NEEDED TO REST“-WA POLY LAMENTS

Wa Polytechnic Guard Kanton Samad has pinned his side’s failure to qualify for the quarter final of the Universities, Polytechnics and Colleges (UPAC) Basketball Championship on inadequate rest.

The third edition of UPAC is headlined by Rexona and had three tertiary institutions; University of Development Studies (UDS-Tamale) and host Tamale Polytechnic compete in Zone B with Wa Polytechnic. NJA College of Education pulled out of the competition at the last instance due to internal challenges.

Speaking to Basketballghana.com after bowing out of the competition, Samad said:

He went on to highlight his side’s relatively diminutive stature as the reason aside stress for the loss stating:

“Looking at the physical stature, the body make up, most of our guys are short and looking at them, most of their guys are tall and we couldn’t match them in terms of the high balls they floated throughout the game and that was a disadvantage to us.”

He however, sounded optimistic about the chances of the Upper West-based side in performing better in next year’s championship.